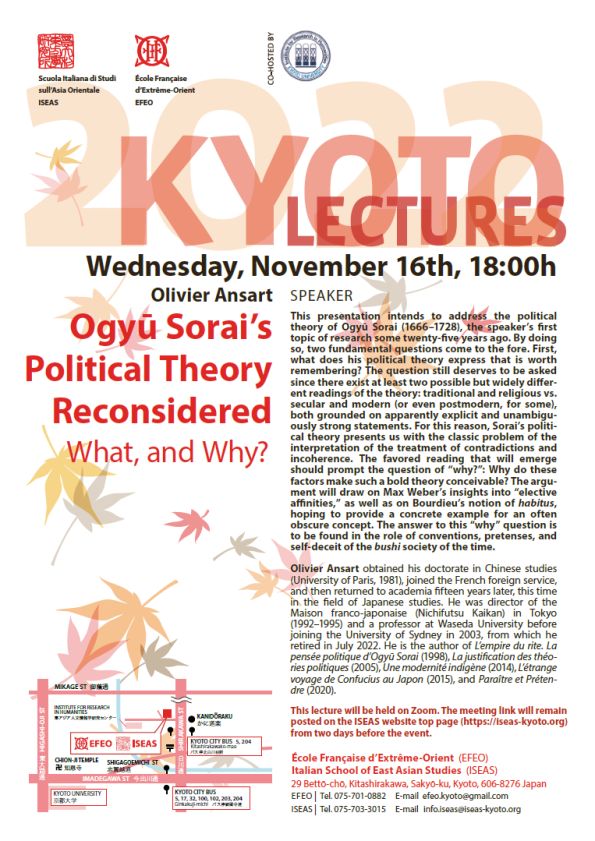 This presentation intends to address the political theory of Ogyū Sorai (1666-1728), the speaker’s first topic of research some twenty-five years ago. By doing so, two fundamental questions come to the fore. First, what does his political theory express that is worth remembering? The question still deserves to be asked since there exist at least two possible but widely different readings of the theory: traditional and religious vs. secular and modern (or even postmodern, for some), both grounded on apparently explicit and unambiguously strong statements. For this reason, Sorai’s politi-cal theory presents us with the classic problem of the interpretation of the treatment of contradictions and incoherence. The favored reading that will emerge should prompt the question of “why?”: Why do these factors make such a bold theory conceivable? The argu-ment will draw on Max Weber’s insights into “elective affinities,” as well as on Bourdieu’s notion of habitus, hoping to provide a concrete example for an often obscure concept. The answer to this “why” question is to be found in the role of conventions, pretenses, and self-deceit of the bushi society of the time.

Olivier Ansart obtained his doctorate in Chinese studies (University of Paris, 1981), joined the French foreign service, and then returned to academia fifteen years later, this time in the field of Japanese studies. He was director of the Maison franco-japonaise (Nichifutsu Kaikan) in Tokyo (1992?1995) and a professor at Waseda University before joining the University of Sydney in 2003, from which he retired in July 2022. He is the author of L’empire du rite. La pensee politique d’Ogyū Sorai (1998), La justification des theo-ries politiques (2005), Une modernite indigene (2014), L’etrange voyage de Confucius au Japon (2015), and Paraitre et Preten-dre (2020).