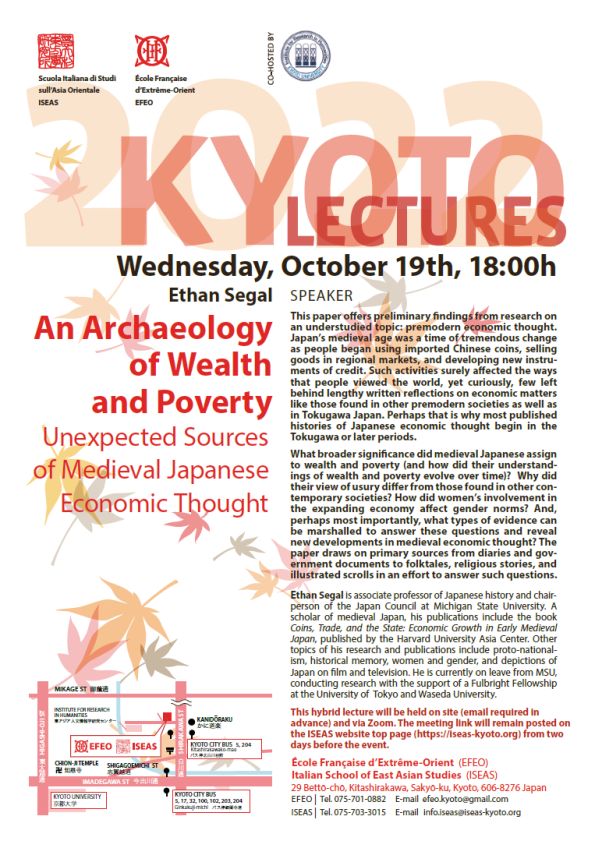 This paper offers preliminary fndings from research on an understudied topic: premodern economic thought. Japan’s medieval age was a time of tremendous change as people began using imported Chinese coins, selling goods in regional markets, and developing new instruments of credit. Such activities surely affected the ways that people viewed the world, yet curiously, few left behind lengthy written reflections on economic matters like those found in other premodern societies as well as in Tokugawa Japan. Perhaps that is why most published histories of Japanese economic thought begin in the Tokugawa or later periods.

What broader significance did medieval Japanese assign to wealth and poverty (and how did their understandings of wealth and poverty evolve over time)? Why did their view of usury differ from those found in other contemporary societies? How did women’s involvement in the expanding economy affect gender norms? And, perhaps most importantly, what types of evidence can be marshalled to answer these questions and reveal new developments in medieval economic thought? The paper draws on primary sources from diaries and government documents to folktales, religious stories, and illustrated scrolls in an effort to answer such questions.

Ethan Segal is associate professor of Japanese history and chairperson of the Japan Council at Michigan State University. A scholar of medieval Japan, his publications include the book Coins, Trade, and the State: Economic Growth in Early Medieval Japan, published by the Harvard University Asia Center. Other topics of his research and publications include proto-nationalism, historical memory, women and gender, and depictions of Japan on film and television. He is currently on leave from MSU, conducting research with the support of a Fulbright Fellowship at the University of Tokyo and Waseda University.