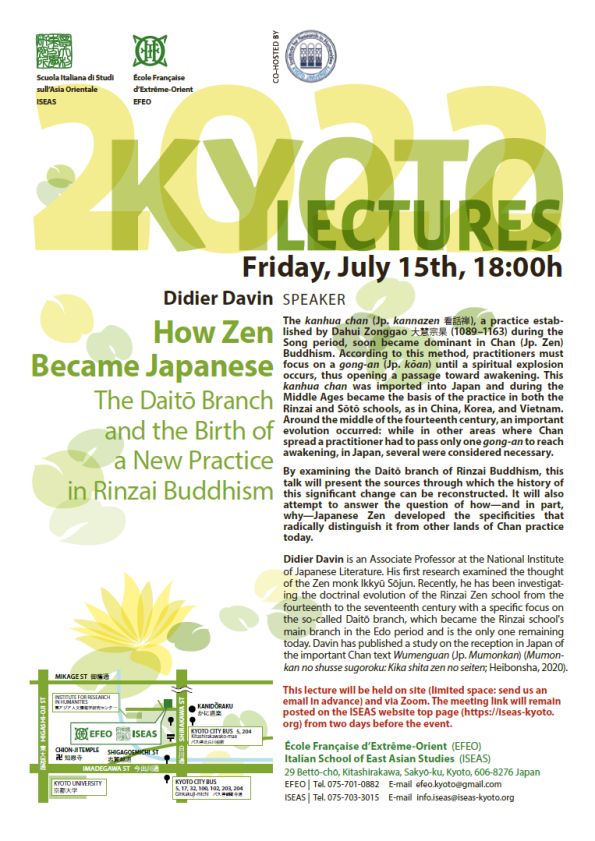 The kanhua chan (Jp.  kannazen  看話禅), a practice established by Dahui Zonggao 大慧宗杲 (1089–1163) during the Song period, soon became dominant in Chan (Jp. Zen) Buddhism. According to this method, practitioners must focus on a  gong-an  (Jp.  kōan) until a spiritual explosion occurs, thus opening a passage toward awakening. This kanhua chan was imported into Japan and during the Middle Ages became the basis of the practice in both the Rinzai and Sōtō schools, as in China, Korea, and Vietnam. Around the middle of the fourteenth century, an important evolution occurred: while in other areas where Chan spread a practitioner had to pass only one gong-an to reach awakening, in Japan, several were considered necessary.

By examining the Daitō branch of Rinzai Buddhism, this talk will present the sources through which the history of this significant change can be reconstructed. It will also attempt to answer the question of how—and in part, why—Japanese Zen developed the specificities that radically distinguish it from other lands of Chan practice today.

Didier Davin is an Associate Professor at the National Institute of Japanese Literature. His first research examined the thought of the Zen monk Ikkyū Sōjun. Recently, he has been investigating the doctrinal evolution of the Rinzai Zen school from the fourteenth to the seventeenth century with a specific focus on the so-called Daitō branch, which became the Rinzai school’s main branch in the Edo period and is the only one remaining today. Davin has published a study on the reception in Japan of the important Chan text Wumenguan (Jp. Mumonkan) (Mumon-kan no shusse sugoroku: Kika shita zen no seiten; Heibonsha, 2020).