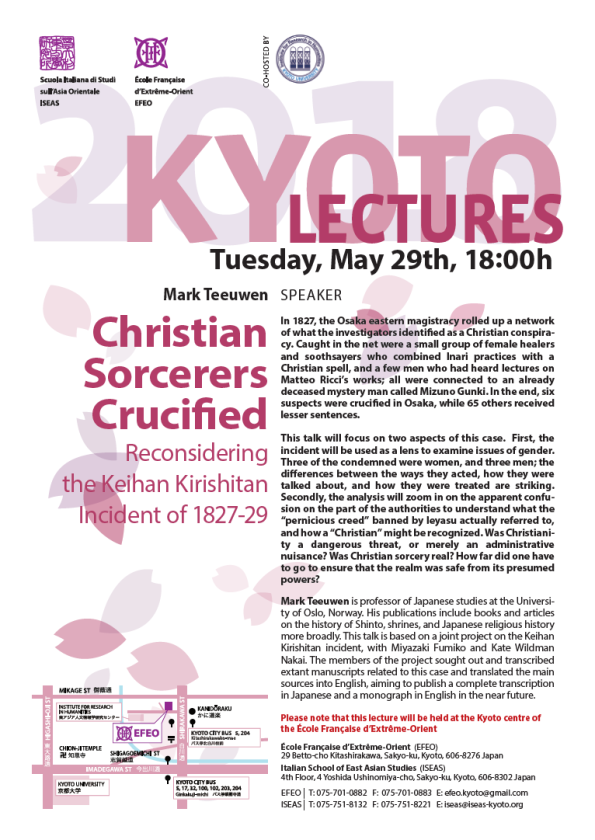 In 1827, the Osaka eastern magistracy rolled up a network of what the investigators identified as a Christian conspiracy. Caught in the net were a small group of female healers and soothsayers who combined Inari practices with a Christian spell, and a few men who had heard lectures on Matteo Ricci’s works; all were connected to an already deceased mystery man called Mizuno Gunki. In the end, six suspects were crucified in Osaka, while 65 others received lesser sentences.

This talk will focus on two aspects of this case. First, the incident will be used as a lens to examine issues of gender. Three of the condemned were women, and three men; the differences between the ways they acted, how they were talked about, and how they were treated are striking. Secondly, the analysis will zoom in on the apparent confusion on the part of the authorities to understand what the “pernicious creed” banned by Ieyasu actually referred to, and how a “Christian” might be recognized. Was Christianity a dangerous threat, or merely an administrative nuisance? Was Christian sorcery real? How far did one have to go to ensure that the realm was safe from its presumed powers?

Tuesday, May 29th, 18:00h
Please note that this lecture will be held at the Kyoto centre of the École Française d’Extrême-Orient.